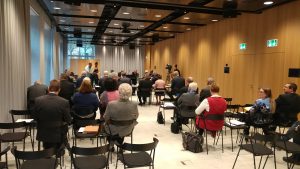 The Judicial Council opened its Fall docket on October 23, 2018 by hearing oral arguments for and against the One Church Plan, the Connectional Conference Plan, and the Traditional Plan.  The Council of Bishops proactively requested the review so that the General Conference would not do its work only to be overturned later by what would almost certainly be an appeal to the Judicial Council.

The meeting was held in an ultra-modern, minimalist hotel in Zurich, Switzerland.  All concrete walls, ceilings, and floors with no wall art or rugs.  Small conference room, all glass on three sides with drab gray curtains, floor to ceiling.  One wall finished in wood.  Very stark black metal chairs and tables with no table skirts.  There is a horseshoe of chairs and tables at the front for the Judicial Council.  There is a podium before the Council.  There is a short row of tables for the speakers.  There are only 40 chairs in the gallery, half of which were reserved seating.  There were five observers.

It had the feel of a quasi-court/church setting.  They announced the “Judicial Council of the United Methodist Church.”  We all stood up and they all nine filed in.  They do not wear robes or fake white wigs—which was a little disappointing.  They took their seats and went around and introduced themselves.  Then one of the members offered a prayer.

The proceedings started immediately.  Bishops Harvey and Carter began and then their legal counsel spoke.  Then Tom Berlin presented the One Church Plan on behalf of the Commission on the Way Forward.  Then Keith Boyette, President of the Wesleyan Covenant Association presented against the plan.  The Bishops saved 5 of their 20 minutes for rebuttal.  The Judicial Council members asked a couple of questions.  They finished and we took a break.

Then the Connectional Conference Plan.  The Bishops pointed out the additional constitutional problems beyond the eight known constitutional amendments.  Pat Miller from the Commission on the Way Forward presented it.  This plan is so unlikely to pass that no one filed briefs for or against it.  I do not think members of the Judicial Council asked any questions?  I do not remember.  This plan is dead.  We took a break.

Then the Traditional Plan.  Bishop Carter came out strong against it, which was refreshing.  Then the Bishops’ Counsel spoke.  Then Tom Lambrecht of Good News presented the plan on behalf of the Commission on the Way Forward.  Tom Starnes, Chancellor for Baltimore Washington spoke against it.  The members of the JC asked lots of questions.  We finished at 1 pm for lunch.

The Judicial Council has said they plan to announce their decisions by Monday, October 29, 2018.  You can see the full video here.  Pop some popcorn–the food will help keep you awake!

Below are my blow by blow tweets:  (For those of you who are not on Twitter.)